Note: This was supposed to go up a week after my first triathlon. Due to some unforeseen commitments, I’ve been unable to complete it until now. Still, a month later, I’d like to share it with you.

In the distance, the tail end of the olympic-distance competitors splash around a green buoy and make their trip back to shore. The officiant gestures for the next wave to come down to the starting gate. I kiss my wife and walk down the beach with the other orange-capped men.

I’ve been working toward this moment for how long? Six months? I only learned how to swim six months ago, so that should probably count as the time I became serious about finishing a triathlon. Or does it start from the first YouTube video I watched because it seemed “interesting”?

I tug at my swim cap. I’ve never worn one before. I went bald long before swim caps were relevant to my life. Do the earlobes go inside or outside? Probably outside. I look to the other men in my wave, try to evaluate their earlobe orientation.

Without fanfare, the officiant tells us to go, in the manner of a theme park employee urging a group of senior citizens onto a roller coaster. We hit the water and it’s warm and I let the months of training kick in, thrashing my way forward. I pass an older man treading water, then a few more swimmers. A man comes seemingly out of nowhere and we collide violently in a full-on chest-to-chest aqua-smush. We swat each other away and I’m back on course. The buoys are almost impossible to see in the waves, and the course is lined by kayaks and motorboats, the latter of which I am especially leery. I picture myself as the latest entry in the Wikipedia article on unusual deaths. Diced by propellers. “Well, we didn’t think anybody could be that slow.”

“You’re not a manatee,” my wife told me when I revealed this anxiety, as if the reason manatees get chopped up by motors is some flaw endemic to the species, and not because they are large, slow, waterbound mammals. Like me.

Yes, the water is choppy today. Yes, I can’t really tell where the buoys are. Yes, ancient things lurk at the bottom of this lake. But I’m strangely calm. Maybe it’s the unusual warmth of the water. Or maybe it’s the tranquility that precedes asphyxiation. Either way, I’m having an illogical amount of fun.

The fun propels me refreshingly unmutilated to the shore. The spectators cheer, mostly for the man who emerges next to me. His blue cap marks him as the leader in the aquabike race and obviously much more legitimate than I am. He sprints onto the sand, stripping off his wetsuit without breaking his stride. He throws his goggles on the ground as we both make our way to the transition area. Was that on purpose? Should I pick them up? Or is this supposed to happen? I don’t want to seem too amateurish by attempting to retrieve AquaBike Man’s goggles if they are meant to be cast aside (Wait, you mean you REUSE YOUR GOGGLES like an idiot???), so I leave them alone. I break out into a reserved jog so everyone knows I’m just as serious as AquaBike Man.

One slippery transition later and I’m on my bike, which has been drenched by the all-morning drizzle. AquaBike Man is but a muscular dot on the gray horizon. The slickened road hums beneath my tires as I turn out onto the highway and I begin the climb that comprises the first half of the bike course, shifting gears in anticipation.

The chain falls off my front gear.

I erupt into a cartoonish “nyooooooooo” and pull over. My wet fingers are numb but with an uncharacteristic burst of fine motor control and some strategic profanity I loop the chain back on continue.

The weirdness of this challenge dawns on me. I’ve spent the last year researching training plans, equipment. Taking swim lessons and working on my form. Cycling the apocalyptic roads of Bethlehem and running in circles around my neighborhood. I’m paying to be here. More money than I’ve ever spent on a road race. I’ve got a speedy suit on that makes me look like a hairy torpedo. This is real. This is serious. And I can’t keep my chain on. I worry I’m not taking this seriously enough. I resolve to grit my teeth more as I ride, imitating the actors in advertisements for energy drinks and ED medication.

The climb begins in earnest and it’s more grueling than I ever thought possible. I remember the course breakdown on the race website, how they said that the climb was rated a “4” on MapMyRide, as if it were being monitored by scientists concerned it could develop into something more serious. A quick survey of my recorded cycling history reveals that I haven’t done a climb like this ever since I started cycling.

About halfway up, trees envelop the road, and the course darkens, and a silence befalls the competitors. No talking, no wooshing. No spectators cheer on the sidelines. Just strained panting and the creak of gears and the occasional sob. It’s the bitter quiet of the shared revelation that cycling is humanity’s ultimate folly, and shame at the arrogance of believing we lowly creatures might conquer this land astride our pitiful machines. Ahead of me, a man curses as the chain falls off his bike.

As I pass a few athletes, I feel like I need to say something, some gesture acknowledging this shared agony, like “Ah, it’s a hill” or “Hell of a hill, huh?” or even simply “HIIILLLLLL”. Luckily, I can’t talk and ride a bike at the same time. The climb is about 1.5 miles long. I make it to 1.4 before getting off the bike and walking on my heels, scraping my cleats against the pavement.  “Now this is a hill,” says a young woman as she passes me with minimal effort.

Finally the terrain flattens out, and I mount my bike, and coast at 30MPH back to the transition area, my tires barely maintaining contact with the slick pavement. Somehow, I’m more soaked than when I finished the swim.

A few turns later and I’m back in transition. I scoot in, pry my shoes off, put on my sneakers. My wife watches, mortified, as I try to affix my running bib to my shirt, my numb fingers flopping all over my chest. I’ve never been particularly skillful with safety pins or life in general, but somehow I manage to slap the thing on and begin the run.

I bound into the woods at my usual 5K pace as my wife cheers. As soon as I’m out of sight I drop down to my half-marathon pace. I can’t run fast. I can’t do anything fast. It took me half an hour just to register for this race.

The run course is simply a tour through all the parking lots the park has to offer. I loop around one, then another, then another. Volunteers cheer and hand out paper cups of water. I grab them all, smash them into my face, let my beard absorb the precious fluid. There’s nowhere to throw the garbage so I just hold an increasing number of squashed paper cups in my fist. I keep running. I should be gritting my teeth more.

The 5K is a descent into chaos. Runners use both sides of the path, forming a sweaty labyrinth through which I must maneuver. Paper cups litter the ground. In the distance, the throaty laughter of the Hill echoes like a cthonic thunderclap. We all loop around identical parking lots over and over again. My legs move reflexively, not out of a desire to finish the race, but because they have forgotten a time when they weren’t consumed by fiery pain, like white-collar workers who stay with their floundering company because they “like the people they work with.” My legs are office dads. Waves lap on the shore. I recall being overweight and out of shape, the gorgeous simplicity of living doughnut to doughnut. On the horizon, a bird cries. Woo, the spectators say. Woo.

Before I realize what’s happening, I floop-a-doop across the finish line.

A finisher’s medal is thrust into my hands. I stumble into the parking lot where my wife is waiting. She embraces me and tells me she’s proud.

I never want to move again. We retrieve my gear and on pulsing legs I make it to the car. The event is already blurry in my mind, a memory of a painful mistake. My body is coated in a film of sweat and rainwater and I smell like the lake. On the ride home, I open Chrome on my phone and scroll through a list of upcoming triathlons, begin selecting the ones I want to do next year. 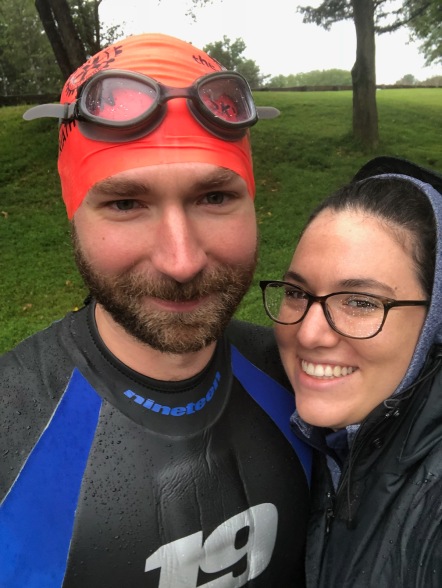