In truth this absence is a symptom of an overall retreat from online life. I’ve been in spotty contact with friends and family for the last few months as I’ve been trying to navigate my wedding, my honeymoon, and my relocation from Maine to Pennsylvania. Now, as life is finally starting to become less blurry, I’m ready to pick up this blog again, and try to make a habit of regular posting.

However, before I dive right back into this blog, I feel like I should provide at least a brief summary of the past few months.

Rachel and I spent the first half of 2018 planning our wedding, trying to work around her schedule as she completed rotations at hospitals and clinics around the country. This culminated in her Wilderness Medicine rotation, a month-long trek through the Gila Wilderness during which she was completely cut off from the rest of the world, returning only a week before the wedding.

In the week she returned, we finalized our ceremony, wrote our vows, had our bachelor/bachelorette parties, and I said goodbye the job I had held for the past four years.

On Saturday, May 12th, we were married in a brief, five-second ceremony and a twenty-hour fever dream of a reception. It was the best day of our lives, although we emerged from the reception bleary-eyed, exhausted, and reflexively thanking anyone who stepped in our field of vision.

We couldn’t immediately leave for our honeymoon because Rachel needed to attend commencement the weekend following the wedding. Instead, we spent a quiet and relaxing two days in Portland before I left for Pennsylvania to look at apartments while Rachel stayed behind to complete her final week of school.

I returned in time to witness my new wife graduate from medical school–eight years of grueling study culminating in two separate commencement ceremonies.  Also, watching her congregate with her friends outside city hall, clad in puffy medieval-era green doctor robes, was like attending a convention of alchemists.

Once Rachel was thoroughly graduated, we boarded a plane for Edinburgh to begin our honeymoon the next day.

The Land of a Thousand Snacks

What followed was a whirlwind adventure through Scotland and England as we toured the beautiful countryside by public transit, perpetually on the lookout for things to stand in front of. 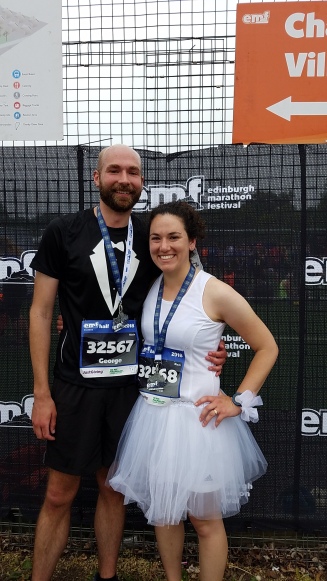 We also visited a variety of museums and historic sites in Edinburgh, Glasgow, and London, learning that every square inch of the island is the location of some kind of gruesome crime. And we made sure to indulge in the never-ending carousel of snacks the United Kingdom had to offer. The pitiful American Oreo, for example, is but a drizzle compared to the flavorful tempest of the almighty Penguin Biscuit.

There was so much to see and do in the U.K. that I can’t possibly write it all out in this brief blog post. We both had a wonderful time and are already talking about going back to explore the northern half of Scotland. We’ve also gone through all the snacks we brought back, so that’s obviously a problem.

The next step in my wife’s medical career is her three-year internal medicine residency in Bethlehem, Pennsylvania. We had one week after our return to pack up our old apartment, find a home for our cat, and move down to our new apartment before she started officially working as a doctor. We accomplished this mostly by freaking out and shouting “WHYYYYY” at the gentle Maine evening.

However, with the help of our family, we were able to load everything into a moving van and make the 17-day drive from Maine to Pennsylvania.

While searching for a job in this strange new state, I’ve been working on my writing and trying to learn a little programming through freeCodeCamp. I’ve also continued my triathlon training, which began in earnest the week after we relocated. The race itself is this coming Sunday, comprising of a ½-mile open water thrash, a 13.1-mile bike drag, and a 5-kilometer weep. More updates on that to follow.

It’s been difficult to juggle the responsibilities and excursions of this year with my commitment to write and blog regularly, but now that our life has settled down, I’m ready to begin again.